Behavioral sport psychology "involves the use of behavior analysis principles and techniques to enhance performance and satisfaction of athletes and others associated with sports” (Martin & Tkachuk, 2000).

Garry Martin and colleagues (2004) documented 30 years of single-subject sport psychology research in a freely-available article published in The Behavior Analyst!

The Behavior Analyst Certification Board (BACB) recently made available many free resources about a variety of practice areas in the field of behavior analysis. One of these is an excellent video presentation by Ray Miltenberger, PhD, BCBA-D, titled "An Introduction to Behavior Analysis in Health, Fitness, & Sports". In this video, Dr. Miltenberger provides an overview of behavior-analytic research in the areas of fitness and sports.

If you're familiar with the field of behavior analysis, you know we describe behavior as anything a person says or does and classify behavior as overt and covert:

Overt behavior can be easily monitored or observed by others. In sport, this might include things such as swimming, throwing a football, serving a volleyball, performing an Olympic lift, yelling at a teammate, arguing with a coach, or talking aloud to one’s self.

Covert behavior refers to internal private behavior that is not accessible to anyone other then the individual who experiences it. In sport, this might relate to thoughts (e.g., “I hope I don’t fall”), feelings, such as nervousness, accompanied by internal physical sensations (e.g., increased HR, rapid breathing), and mental rehearsal (e.g., self-talk, imagery/visualization).

Behavior can be changed in a variety of ways. What behaviors you might ask? Well, some behaviors (skills) are targeted to be increased, some changed, and some decreased. 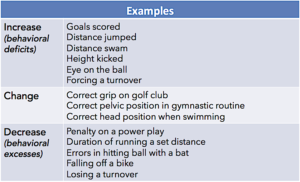 Furthermore, in behavior analysis, we talk about a variety of environment stimuli or the physical variables in an individual’s immediate surroundings that impact one’s sensory receptors and influence one’s behavior.

Two basic classes of stimuli are antecedents, which precede one’s behavior an often serve to prompt, cue, or signal, and consequences, which follow one's behavior and impact the future probability of engaging in the same or similar behavior in the future.

When we put it all together, we can use the ABC Model as a way to begin to understand why people do what they do: 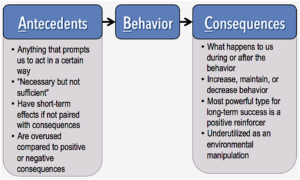 Below are a couple of examples in which we can apply the ABC Model to athletic behavior. The ABC Model can be used as an assessment tool to help athletes and their coaches better understand the factors that influence covert (private, internal) and overt (directly observable) behaviors. 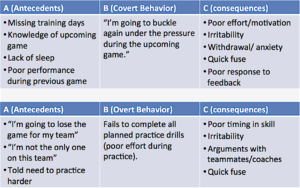 Asking athletes to keep an ABC (antecedent-behavior-consequence) Log is a great way to help them increase self-awareness about the things that support and encourage vs. impede and detract them from engaging in a desired behavior (e.g. completing required mobility drills, showing up for practice on time). 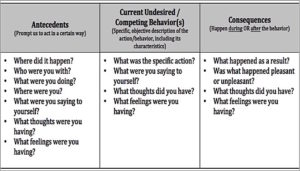 By identifying such things, athletes and coaching staff are more easily able to make necessary tweaks to routines and to environmental stimuli that will help improve the chances for improved performance, sustained change, and maintenance of targeted behaviors and associated outcomes!